Christmas at the King’s 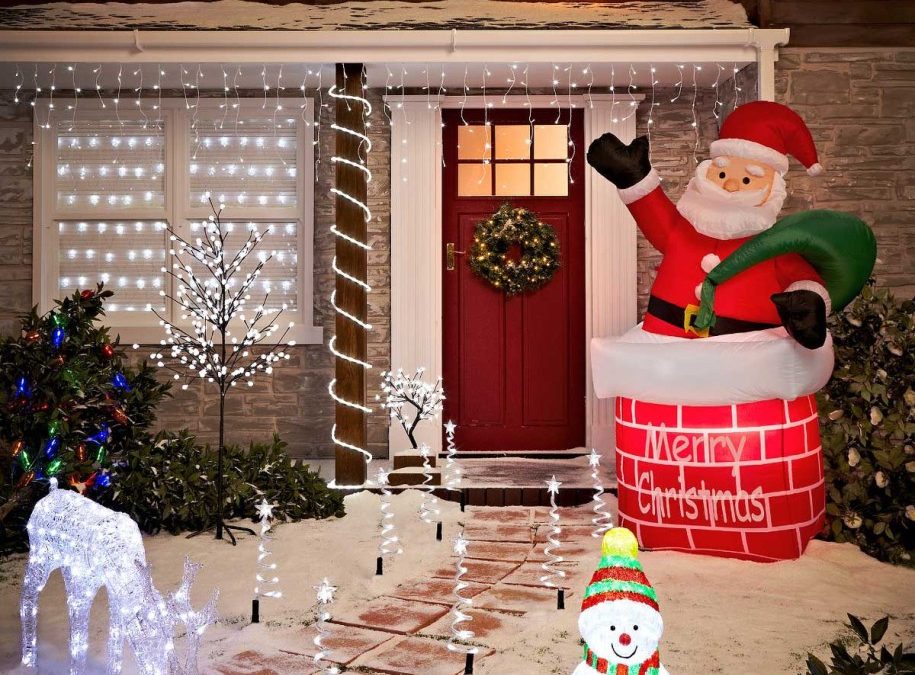 Christmas at the King’s, I’m guessing, is no different than most American homes. At our house, the Christmas season doesn’t officially begin until the day after Thanksgiving. Discussions begin with the commitment to a family photo, (which rarely happens), sending out cards, (which are usually late), and making this Christmas a simpler, more meaningful one. Translated we won’t spend a lot of money we don’t have.

On the weekend after Thanksgiving, the ordination of the season is kicked off with the christening of the premises with decorations. My job begins with gathering and untangling the mass of entangled, multi-colored outdoor lights, as I pray for no rain. Despite the weather, I brace myself for the task by making myself an elixir of Irish coffee, (six ounces of coffee, two shots of Bailey’s Irish cream, one shot of Jamison’s Irish whiskey). As the coffee kicks in and the prodding of my wife takes effect, I drag out my trusty ladder and set to the task of stringing lights across the front of the house. Inside, Laurie hides behind the front window curtains with her finger on the speed dial set to 9 1 1 as I straddle my latter, precariously, across the hedges to hang those last few bulbs.

All is well until I plug the lights in and discover only half of them light up. Then I head to Home Depot for new lights and extension cords. As I drive to my destination, I tell myself, “What we have is enough. We don’t need to go crazy with outdoor decor.” I determine not to buy more than what I need; That is, until I see the new yard displays. The shelving in the garden section is fully lit with the usual deer with moving heads, glowing penguins, inflatable snowmen, polar bears: a mother and her cub, and an illuminated plastic Nativity. I return home with a new set of lights and a couple of yard displays. The spirit is willing, but the flesh is weak.

Once the new lights are strung and the yard displays are strategically located, the outside is finished. I head back indoors for my next task. I make another cup of Irish coffee, (four ounces of coffee, four shots of Bailey’s, two shots of Jamison’s). I then haul the artificial tree out of the garage, set it up and wrap lights around it and climb my trusty ladder to place the star. Laurie pretends she’s not watching as her finger rests on the 9 1 1 speed dial. When my friends show me pictures of their family tromping through mud and snow in search of the perfect tree, I usually nod with approval and secretly sigh relief that Sam is allergic to real trees.

Next, Sam and I go about the complicated process of assembling our small, life-like Nativity which consists of Sam and I passionately discussing the placement of each piece. According to Sam, it is extremely important that the display appears exactly the same as the picture on the box it came out of. The last item is to hide the baby Jesus. Because, you know, he hasn’t been born yet.

My share of the decorating is done. The rest is up to Laurie and Sam. I sit quietly watching from my Lazy Boy recliner with a fresh cup of Irish coffee, (2 ounces of coffee, four shots of Bailey’s, four shots of Jamison’s), while Laurie orchestrates the careful placing of ornaments on the tree and Sam ignores her, placing them wherever his creative heart leads him. A very important part of this tradition, is to ensure that at least one ornament is broken. Usually a meaningful one. At least that’s how it looks to me.

After decorations comes the ritual of Christmas baking. Laurie makes her multiple trips to store to gather all the ingredients, (half of them we already have), while I head to the liquor store for more Bailey’s, Jamison’s and Bacardi rum—for the rum cake. I like to help in the cooking process. By help, I mean pouring Laurie a small glass of Bailey’s on ice and I make myself the necessary cup of Irish Coffee, (forget the coffee, half Bailey’s half Jamison’s). I do the important things like remind Laurie what she forgot and tasting the end-product for quality assurance. My favorite part is the rum . . . on the cake, (jeez, I don’t drink that much!). When all is complete, cookies and rum cakes are delivered to neighbors and friends. Many of our neighbors know we’re coming. Which explains why some of them never seem to be home.

It’s Christmas Eve. Presents to young relatives we know well are delivered, and gift cards to those we don’t. All the Christmas cards are, well, still sitting on the kitchen counter. But we are determined to get them out! Meanwhile, Laurie, Sam and I enjoy trays of shrimp and smoked oysters on crackers with cocktail sauce and cream cheese. We wash it all down with Martinelli’s sparkling cider, (Laurie has locked up the Bailey’s and Jamison’s by now), while we watch “The Polar Express” movie. Before we head off to bed, Sam finds the baby Jesus and places him in the manger, and eggnog, (Santa doesn’t like milk), and cookies are put out for our mysterious, late night visitor.
Early Christmas morning begins with me hammering the walls outside Sam’s bedroom door at precisely 6 AM, then rushing to exclaim that Santa was on the roof and we just missed him. Sam musters up all his strength to prod his eyes open and force himself out of bed. He stumbles to the window hoping to catch a glimpse of the sleigh leaving our rooftop. I should feel a twinge of guilt as I watch. But it’s just too much fun to watch.

In the kitchen, orange rolls and bacon are made while the coffee brews, (just coffee, seriously!). Sam notes that the eggnog and cookies for Santa are gone and Laurie gives him a knowing wink. The ritual of passing out the presents begins. And to our surprise, we find that Santa has delivered all those forbidden expensive gifts we so ardently sought to avoid! The usual looks of guilt are exchanged between Laurie and I as we watch those miraculously delivered presents get opened.

Some traditions have changed over the years Some have stopped all together. The changes started the year Sam began to question the existence of Santa. I finally had to confess to him that I am Santa Claus. He still doesn’t believe me, (everyone else does). No more leaving eggnog and cookies out on Christmas eve, no more pounding on his bedroom walls in the morning. But we still set up the Nativity together. And we still hide the baby Jesus until Christmas eve. Sometimes we watch the Polar Express together. Laurie doesn’t hide the fact that she’s fingering the 9 1 1 speed dial anymore. I probably don’t drink as much Irish coffee as I used to and relatives don’t get presents anymore. One thing that is never lost on me is that I am blessed with a loving family and thoughtful friends.

Merry Christmas from the King family!